Yeovil Town legend Terry Skiverton has left Huish Park ending more than two decades with the club and is believed to be on his way to League One Charlton Athletic.

The club confirmed the exit in a statement following after a  penalty shoot-out defeat against Needham Market in the FA Trophy at Huish Park on Saturday and manager Darren Sarll spoke about his now former (*sob*) assistant in his post-match interview.

The statement said the former defensive giant, captain, player-manager, manager, assistant manager, Academy manager was departing to take up “a new role in the Football League” – but did not name a club.

We understand that Skiverton is on his way to The Valley who have had former striker Jason Euell as caretaker assistant manager to boss Johnnie Jackson since the end of last season.

It would appear Skivo and Jackson may have taken their coaching badges together at the same time. 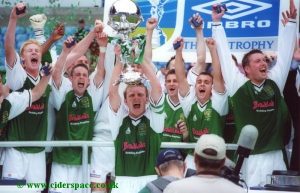 If the move is confirmed, it would mean the 46-year-old follows in the footsteps of fellow former Glovers Nathan Jones and Ben Roberts who have both held coaching roles.

There’s a lot you can read between the lines of what Darren Sarll said in his post-match interview, where he repeatedly talks about wanting “to retain some kind of professionalism.

Speaking to BBC Somerset’s Sheridan Robins, Darren Sarll said: “Terry has left the club and decided to take up an opportunity in the EFL which is very sad.

“As his friend, I will miss him greatly. Professionally he is excellent, he’s done so well for me, he’s a brilliant character and a very good coach.

“All the other stuff of why and where are for him to speak about, he’s a grown man and he needs to answer those questions himself.

“I want to retain some kind of professionalism and dignity out of a pretty crappy day.”

The club’s statement included a quote from Chairman Scott Priestnall – who made a rare visit to Huish Park for last week’s televised FA Cup defeat to AFC Bournemouth – saying: “I’d like to thank Terry for everything he has done for Yeovil Town. He is undoubtedly a club legend, both for his service on and off the pitch. He will always be welcome at Huish Park.”

The statement went on to add: “Skiverton, departs as he moves into a new role in the Football League. All at Yeovil Town would like to extend our gratitude to Terry for his stellar service to the football club, and wish him all the best in his new role. “

BREAKING: DS confirmed post match that Terry Skiverton has left the club to take up an opportunity at an EFL club.

It ends a 23 year spell at the club. The manager says he will miss him as a professional and as a friend. #YTFC

Skiverton’s joined Yeovil Town in the summer of 1999 when he was signed from Welling United in the Football Conference by then-manager Colin Lippiatt, as part of a trio of signings alongside strikers Adrian Foster and Jason Eaton and midfielder Dave Norton.

His debut came in far from memorable circumstances with a 5-0 thrashing at Scarborough on the opening day of the 1999-2000 season, but the career which followed was memorable in just about every way.

Under Lippiatt, David Webb and Colin Addison he was a rock in the heart of defence, but it was the arrival of Gary Johnson in 2001 that truly elevated Skivo to legend status.

He lifted the FA Trophy as captain in Gary’s first season, skippered us to the end of 108 years of non-League football with the Conference title in the second season, and then the League Two championship in 2004-05.

In 2007 he was named in the League One Team of the Year having been at the heart of Yeovil’s charge to the play-off final.

Following the sacking of Russell Slade midway through the 2008-09 season, Skiverton answered the call of his club to take over as player-manager and guided us to safety in League One, calling an end to his playing days at the end of season. His final appearance saw him last just 36 minutes of a goalless draw at home to MK Dons – but we at least kept a clean sheet.

Having kept us up for the 2009-10 campaign in League One, his loyalty reached new levels when with the side struggling in early 2011, he stepped aside for the return of Gary Johnson becoming his number two.

Skivo then became a key part of the coaching staff which guided the club to its highest-ever level with promotion to the Championship in 2013, and even had a further spell in caretaker charge between the sacking of Johnson in February 2015 and the appointment of Paul Sturrock two months later, returning to the coaching staff.

Since then he’s been a coach, run the club’s Academy, been assistant manager and even got one of his sons, striker Finlay, playing for the club’s Under-18s.

Quite simply, he is Mr Yeovil. Skivo – thanks for everything, we’ll miss you!