The manager said some reports had been received of “some prejudice and discrimination and hate” directed at his players during the 5-0 win at the Southern League Premier South side.

A report on Bristol Live on Friday morning claims the abuse was targeted at striker Adi Yussuf and goalkeeper Grant Smith by sections of the Lodge Road crowd.

Yate Town have said they are not aware of any allegations and Yeovil have declined to add anything further. 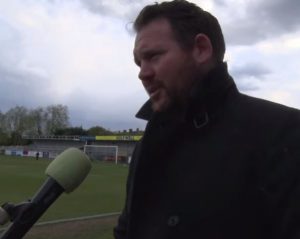 Speaking at his weekly press conference on Thursday, the manager said: “We are going through a process with the FA.

“There was a couple of reports from witnesses that there may have been some prejudice and discrimination and hate.

“The one I know most about is the hate. What people think is okay to say to another human being has gone bonkers, it’s disgusting.”

The manager spoke at length about the impact of abuse and warning of the impact on players, drawing parallels with the mental health issues experienced by Lee Collins, who tragically took his own life earlier this year.

He added: “It is a shame because I thought Yate, the manager and players conducted themselves in a fantastic fashion and it’s a shame we have had reports of hate and maybe some discrimination from the terraces.

“From a manager that has dealt with an individual with terminal mental health issues, that becomes an anxious moment for me because we have seen the worst of it.”

The Bristol Live article claims “vile references” were made about Yussuf’s mother, who was in attendance, and said cries of  “we want you to die” were heard at the game and that Smith was subjected “to similar abuse when defending the goal in the second-half.”

The report adds: “The abuse continued after the game when Yussuf was pitchside with his family. Yate fans exiting the ground were heard singing abusive chants within metres of the player.”

A spokesman for Yate Town said the club was “not aware of any FA investigation” adding there was no mention of an incident in the report from match referee Matthew Russell.

When approached for further comment, Yeovil said they could add nothing further than had been discussed by the manager due to the ongoing investigation.