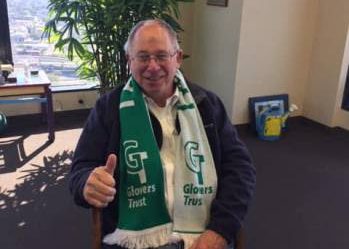 Rob Couhig, the American businessman who tried to buy Yeovil Town when it was eventually sold to current owner Scott Priestnall, has spoken about his efforts to buy the club.

Having failed in his effort to buy the club from then-owners Norman Hayward and John Fry, he went on to buy Wycombe Wanderers from its supporters’ trust in February 2019.

Speaking to the Price of Football podcast, Couhig said he was contacted by Mark Palmer who was brought to the club by Hayward in an effort to find a buyer.

Couhig said: “I met with Mark and my best friend, he and I had invested together in things for 40 years.

“When we walked out of the meeting with (Mark), my friend, Dick, said to me ‘under no circumstances and I investing in that, do not use my name, do not act like I am involved in this.

“But (my wife) Missy and I made the trip to Yeovil, we really liked it there, it’s a terrific area of the country, the people down there could not have been nicer, but they were in financial trouble so we lent them some money.

“That is when we first started to understand ‘maybe this thing was sliding away from her and towards what Rob wanted to do.

“We couldn’t get that deal together and we thought we were out.”

For those of you who don’t remember the deal with the Couhigs, back in February 2019 it appeared a deal had been done to to buy 92% of Huish Park Partnership, the company owned by Hayward and Fry which owned the club’s assets.

He spoke with the local news and the deal looked to be done until after the club’s relegation out of the Football League when the club issued a statement saying it had “not been possible to agree mutually acceptable terms and conditions.”

In his own statement, Couhig went on to say that neither the price or the club’s relegation were the reason for the deal collapsing.

There was then a bit of ‘will they, won’t they?’ with a consortium including former Glovers’ director Andy Rossiter which failed to conclude a deal with Hayward and Fry, and in June 2019, Priestnall and his fellow owner Errol Pope turned up and completed a deal.

You can listen to the interview with Rob Couhig in full – here.