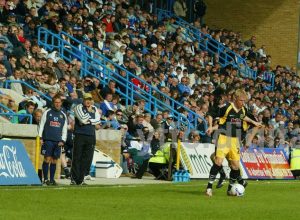 Yeovil Town defeated Gillingham 2-0 in preparation for the 2007 League One Play-Off campaign.

Manager Russell Slade took the opportunity to rest a few key players with the likes of Arron Davies, Chris Cohen, Nathan Jones and Marcus Stewart all missing from the match day squad.

The visitors still proved too strong though, goals from Jean Paul Kalala – his first for the Glovers – and Wayne Gray enough to separate the sides.

Among the changes made by Slade, a young Craig Alcock made his debut from the bench, whilst names like Daniel Webb and Tom Clarke were also given game time.

Yeovil finished the season in 5th place with 79 points and would eventually fall just short in their quest for promotion with a loss to Blackpool at Wembley.