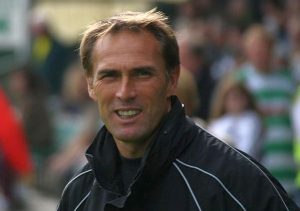 Yeovil Town made a management change on this day in 2006.

Steve Thompson, was – for the second time – stood down as the Glovers’ manager.

He and assistant Kevin Hodges were told that the club was going to look elsewhere for a head coach.

At the time, the official statement read;

“Following lengthy discussions, the Board of Directors of Yeovil Town Football Club have now confirmed, that subject to further talks, Steve Thompson has agreed to continue his role as first team coach, but to relinquish his football management duties in the near future.”

Yeovil Town Chairman John Fry gave the following view on the situation to the official site:

“Steve Thompson has made a fantastic contribution towards the success of this club during his eight years of service as a player, coach and manager. He is an essential part of future plans in developing a team for Championship football at Huish Park. It is the right time to make the necessary changes for the challenge of keeping the club in Coca Cola League One next season and the important task of appointing the next manager of Yeovil Town Football Club which will need to be completed by the end of this month. In the meantime negotiations will continue with out of contract players.”

Thompson would go on to confirm his initial displeasure at the decision saying “Myself and Kevin were devastated when we were told the club was looking for a new manager. We feel that given the circumstances this season, we have done a very good job. As for our future circumstances, talks between myself, Kevin and John Fry are on-going.”

Talks would continue and soon the announcement of Russell Slade‘s arrival to work alongside Thompson would follow, but Kevin Hodges would leave the club not long after,

Slade and Thompson would lead the Glovers to the League One Play-Off Final in their first season as Manager and Assistant.