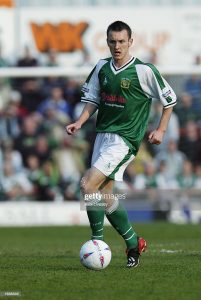 It was reported that the Glovers parted with little over £20,000 to sign the Welshman.

At the time Ciderspace described Williams as “an exciting twenty-one-year-old who can play anywhere up front, or in midfield. He has shone in a frankly poor Bulls team, and was the club’s top scorer last season. The Glovers have been interested in him for some time, and in fact tried to sign him in a double package with current Player of the Season Michael McIndoe during the 2000-01 campaign. His capture now, in the face of strong interest from several other Conference and League clubs, is testimony to the growing ambitions and stature of Yeovil Town. We at Ciderspace believe this will prove to be a signing of consequence, and are sure Gavin will be a great success in the green and white in the coming seasons”

Williams would, of course go on to become a Glovers legend across multiple spells, including a stint on loan in 2010 before joining the team permanently once again in 2011 and would end his time at Huish Park as part of the 2013 League One Play-Off winning squad.

Gav would eventually depart Somerset for West Ham in 2004 before spending time at Ipswich, both Bristol clubs, Woking and was most recently seen as Player-Manager at Merthyr Town in Wales.