A social media post by Luton Town winger Josh Neufville has hinted at a possible return to Yeovil Town. 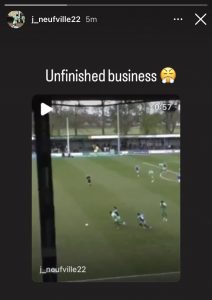 The 21-year-old, who became a fans’ favourite at Huish Park after two successful loan spells over the past two seasons, posted a selection of his highlights in green and white on his Instagram on Sunday night.

On top of the post is the words: Unfinished business.

In the comments, fellow loanee Jack Robinson replied: “What a player ytfc are getting congrats mate.”

Far be it from us to speculate on possible summer arrivals – see story featuring Morgan Williams’ dog from this time last year – but if arrival of Neufville would be quite a coup for new boss Chris Hargreaves.

If he were to join, he would be the first signing for the manager who has tied up existing squad members goalkeeper Grant Smith, defenders Max Hunt and Morgan Williams, midfielders Josh Staunton and Lawson D’Ath and forward Tom Knowles.

In his first loan spell from Luton, managed by former Yeovil defender Nathan Jones, Neufville turned out 31 times in the second half of last season.

That ended with a horrific ankle injury in the penultimate National League fixture of the season at Altrincham.

Having spent eight months regaining his fitness, he returned on loan in March and went on to make 11 league appearances scoring the second in a 2-1 home win over Stockport County.

He was recalled ahead of the final game at Altrincham with his parent club in the Championship play-offs.