On loan defender Dan Moss has returned to his parent club Championship Millwall with 12 days of his stay at Yeovil Town remaining, it has been confirmed. 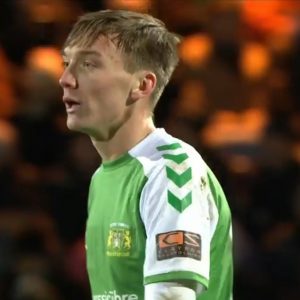 The full-back had been intended to stay until the end of the month but boss Darren Sarll had suggested that 21-year-old would be heading “to pastures new” when he spoke after last night’s defeat at Southend United.

In a message on his Twitter, Moss said: “It’s been an absolute pleasure to play for Yeovil, I’ve enjoyed every minute of it and can’t thank anyone enough for my time here.

“I wish the boys and the club all the best for the rest of the season. Hope to see you back in the Football League where the club belongs.”

Moss’ early exit suggest we will see Moss appear with an EFL club in the coming days although the Millwall statement on his return suggests he will rejoin the Lions’ under-23s set-up.

His departure leaves our options on the right side of defence with Alex Bradley (remember him?) and Mark Little, who is  on his way back from an injury picked up in pre-season, as well as centre back-turned-full back Morgan Williams, who has played there this season.

Speaking to BBC Somerset the other week, Moss said his time at Huish Park has helped improve his game.

He said: “I feel so much more confident as a player, that’s down to Yeovil. It’s given me the opportunity to play first team football and I can only thank the gaffer and Terry (Skiverton, assistant manager) for that.

“The games in a first team environment, it’s just given me confidence more than anything. My whole game in general has improved whilst I’ve been here.”

From all of us at the Gloverscast and we have no doubt every Yeovil fan – a big thankyou to Mossy! You played like you were one of our own and we appreciate all you gave us.

@6Danielmoss6 , you have been excellent from the get go. Been an integral part of our team and will be missed both on the pitch and around the club. You’re a class lad who has a great career ahead of you. Keep working hard, been a pleasure brother 💚 https://t.co/4ofmurjZML