There’s been a lot of water under the bridge since National League new boys King’s Lynn Town racked up a 2-1 win over ten man Yeovil Town at Huish Park in the opening match of the season.

That win was one of just two National League victories the Norfolk side picked up until the end of November which led to the sacking of boss Ian Culverhouse who had overseen a run of eight straight defeats.

Former Southampton player Tommy Widdrington was appointed and broke that run with a 2-1 win over whipping boys Dover Athletic in his first game out.

Since then the Linnets have only picked up one league win – a 3-0 win against W*ymouth – but they come in to the weekend having won three of their last five – including victories over promotion-chasing FC Halifax Town and Bromley.

Their form puts them tenth in the National League rankings over the last six matches as they hunt down Aldershot Town who occupy the final safety spot in the table, three points ahead of King’s Lynn, who have played three games more.

King’s Lynn boss Tommy Widdrington has trotted out the cliche that “every game is a cup final” for his side as they look to fight their way out of the division’s bottom three.

He told the Lynn News: “We’ve got seven cup finals now and if we give that sort of energy, effort, enthusiasm and quality at times on a difficult surface then we’ll go close.

“The team are starting to reflect my personality as a group, which means they don’t want to lose.

“We’ve put some wins on the board and have kept adding points every couple of games, so if we continue to do that it will make for an interesting end to the season.

“I need that kind of effort and enthusiasm for every minute of every single game that we have left.

“I knew our season wasn’t going to be defined losing to Chesterfield or at Wrexham, it’s what we do here and I want us to make this a difficult place to come.”

Of Yeovil, the boss added: “It’s Charlie (Lee)’s first experience as a manager, but he has loads of football experience and we are expecting a tough encounter.

“We have to make sure we impart our way on them rather than them on us, as we did against Halifax and Bromley, and if we can do that we will give them a good game.

!There are teams in this division we can’t compete with over 44 games, but we can compete with them over 90 minutes when we face them. That’s what we will do with Yeovil.”

Striker Malachi Linton will definitely be missing having undergone an operation on his injured leg this week.

The 21-year-old has been on loan from League One Wycombe Wanderers and turned out in the opening day fixture.

He went off after 15 minutes of the 3-0 defeat at home to $tockport County a couple of weeks ago and has not appeared since.

Boss Tommy Widdrington will also be without centre half Kyle Callan-McFadden who has not featured since the end of November or on loan Dagenham & Redbridge midfielder Harry Phipps, who has not played since the defeat at Wrexham at the start of March.

A FOOT IN BOTH CAMPS

There are not a huge number of connections between these two sides from different part of rural England.
But, Swiss-born striker and sometimes mixed martial arts fighter Gold Omotayo is one of them. 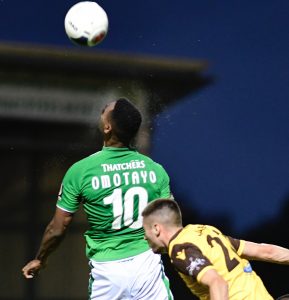 The 28-year-old has been leading the line for King’s Lynn this season with 32 appearances albeit with only four goals to show for it.

He was one of the strikers who were brought in during the 2019-20 season, playing 14 times and scoring twice with both goals coming in a 2-0 win at FC Halifax Town in September 2019.

One of his last acts as getting a red card in the return fixture against Halifax three months later.

Having left Somerset, Gold had a four-game stint at Halifax in October 2020 before a brief spell at National League South side Gloucester City and then arriving at Wrexham in October 2021.

He managed three goals for the Welsh side before they became big spenders and in his penultimate appearance he scored twice in a 5-3 win over King’s Lynn, who he then went on to join in the summer.