Yeovil Town will be hoping to put back-to-back 3-0 losses behind them on Tuesday night when they travel to take on fellow mid-table side, Aldershot Town.

The injury ravage Glovers  head into the game with the Shots on almost identical records with Aldershot one place above Yeovil in the table on goal difference.

Both sides come into the game off the back of two losses, the Glovers have fallen 3-0 to both Wrexham and Halifax whilst the Shots will be hoping to put away defeats to Sutton (3-1) and Torquay (2-1) behind them.

In an odd quirk of the fixture list, Aldershot haven’t played since the 1st of May, an 11-day break between matches, Yeovil’s two most recent games have come since their opponents last outing.

Aldershot midfielder Josh Rees is their top scorer this campaign with 12 goals,

Darren Sarll has a longer list of players potentially unavailable rather than ones he can actually call upon.

In addition, Matt Warburton has returned to Northampton and Gabby Rogers is still unavailable for selection.

In better news, Charlie Lee will be available again after suspension and might be asked to play in three different positions.
Toby Stephens can expect to find himself in the squad once more along with potentially one or two more young faces from the club’s Under 18s.

When we last met 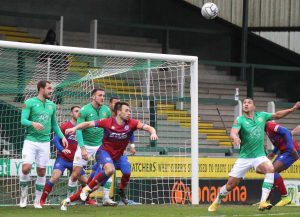 Yeovil took four points from a possible six when the sides met during the 2019/20 season, a 3-1 away win was followed with a 2-2 draw at Huish Park,

One of the quirks of that 3-1 win was that the Shot’s 19th minute equaliser was scored, but none other than Max Hunt, now of course, in the green and white of Yeovil Town – plus anyone at the Recreation Ground that night will remember one of those atmospheres among the travelling fans.

Earlier on this season, it was a Courtney Duffus brace and a third from Albi Skendi that secured all three points in a comfortable 3-0 win, Joe Quigley was sent off in the final moments to dampen the mood slightly,
You can watch highlights of that 3-0 win below.

Foot in both camps

We here at the Gloverscast took an extensive trawl through the archives (ok, Wikipedia…) for some names who can be associated with both clubs, and here’s some that we found.

Steve Collis: the fomer Glovers Gloveman joined Aldershot on loan from Yeovil in 2002, he played just three times for the Shots before returning to stop shots at Yeovil.

Harry Cornick has spent time on loan at both clubs before, whilst Nick Crittenden has racked up well over 200 appearences for these two sides.

Even the Gloverscast own David Coates, was born in the town… a long time ago, mind.

Fans wishing to watch the game can head HERE to buy a streaming pass, with the usual radio coverage from BBC Somerset and Three Valley’s Radio also available – and don’t forget all the post match discussion including the Gaffer’s quotes can be found right here on Gloverscast.co.uk