Yeovil Town picked up their first points of 2022 against Woking this afternoon thanks to a first half goal from Charlie Wakefield.

Mark Little was sent off in the second half after receiving two bookings, giving the ten-man Glovers a difficult final half an hour to keep Woking out.

It wasn’t pretty, there were plenty of bodies put on the line in the second half, but Yeovil go into Tuesday’s derby against Weymouth with a bit of wind in their sails.

Here’s how Coatesie saw it…

The main talking points of the team news was a start for loan signing Ben Barclay alongside captain Luke Wilkinson, who was returning from injury, in the heart of defence.

Up front, manager Darren Sarll stuck with a front three of Charlie Wakefield, Tom Knowles and Sonny Blu Lo-Everton, who had impressed for large parts of the previous match against Wrexham.

The first chance fell to the home side after just three minutes as a corner routine found its way to central defender Joe McNerney, but his effort sailed over the bar.

A lung-bursting run from Matt Worthington created the first opening for Yeovil which fell to Lo-Everton, whose shot was blocked.

But as the game got going, Yeovil’s pressing game began to tell.

It was that tactic which told after you 15 minutes when a through ball forward from Morgan Williams, back in a left-back position to accommodate for the arrival of Barclay and Wilkinson, set Charlie WAKEFIELD free, he moved forward made no mistake to smash the visitors in front. 1-0.

That put Yeovil tails up and Jordan Barnett was the next to have an effort which well stopped by Woking keeper Mark Smith. 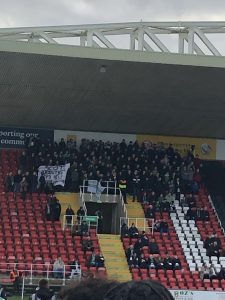 The fans in the stand behind the goal unfurled a banner in protest against owner Scott Priestnall, which seemed to spark an atmosphere – perhaps sponsored by O’Neill’s, Woking!

A goal in front and with an opposition struggling to create anything, there was not a huge amount of feed the atmosphere after that.

The biggest talking point of the final 25 minutes of the first half was a booking for Tom Knowles. It is easy to blame Ben for mentioning that a yellow card would keep him out of the derby with W*ymouth, but in reality it was self-inflicted. Not retreating for a free-kick definitely goes on the list of ‘did you need to?’ reasons for picking up a yellow.

From that you can tell the rest of the half there was nothing much to write home about.

Woking’s inadequacies, admittedly minus star man Max Kretzschmar and top scorer Tahvon Campbell who had departed in the week, had as much to do with the lack of goal-scoring opportunities as anything.

For Yeovil, the tactic was to get the ball to their front three and you got the feeling they could create something.

There was huffing and puffing on both sides, but it was the visitors who went in ahead at the break.

The opening 15 minutes saw Yeovil have to weather a storm with the home side turning up the pressure, whilst balls up forward for Yeovil relied on us having a player to hold the ball up. For all their qualities, neither Wakefield, Knowles or Sonny are that, which meant possession repeatedly returned to the home side.

For the entire first half referee, Tom Bishop, was drawn in to giving easy yellow cards and the howls  of abuse he got from both sets of supporters and benches indicated his quality. That is within Rule 1, right?

But too often the fouls were easy decisions for the official to give, and on 62 minutes a tackle from Mark Little in front of the home dug out as too much of an opportunity. His second yellow and he was off.

Lo-Everton was sacrificed for Jack Robinson and the Cards smelt blood, but could not find the quality necessary to make the most of their numerical advantage.

On 72 minutes, Adi Yussuf, who came on to some effect in the FA Trophy game at Huish Park, came on in place of Knowles. A man to hold the ball up, says the optimist in me*.

Two minutes after that change came a moment of (almost) quality from the hosts, when former Yeovil loanee Rohan Ince found space to unleash a shot which was blocked by Wilkinson.

If Yeovil were to get anything it was going to be from a breakaway, and they got one on 79 minutes when Wakefield got away and found the onrushing Bradley who tried to curl an effort wide.

For the rest, it was wave after wave of attacks from the home side. There were bodies in the way, blocking shots, whilst the home side spurned opportunities time and again.

The final whistle sounded to a roar of relief and exaltation from the travelling faithful. It wasn’t pretty  but three more points are on the board.

* – I was too optimistic about Adi. Sorry.