Bookings: Grivosti 90+5
Sendings off: None

Two pieces of defending which defied belief saw Yeovil Town fall to a 2-1 defeat at Scunthorpe United on the opening day of the National League season.

Having given giant Iron centre half Andrew Boyce the freedom of the box to head home the opener with 26 minutes gone, the Glovers gifted Jacob Butterfield the freedom of Glanford Park to smash home the second on the hour.

The first half was utterly abject from the visitors with a five-man defence with Charlie Wakefield and Jamie Reckord operating as wing backs repeatedly pulled apart by the home side, playing their first game since relegation out of League Two in May.

Glovers’ boss Chris Hargreaves responded with a change of shape with Wakefield and Reckord given more licence to go forward and, albeit with a low bar to reach, the second was an improvement with Reckord pulling a goal back on 74 minutes to set up an interesting finish.

Here’s how Dave saw it from his vantage point in the away end in Lincolnshire…..

After a shaky opening few seconds, a long ball forward from Max Hunt set Malachi Linton away on two minutes, his ball in dropped to Jamie Reckord, up from left wing-back, to lash one wide from the angle.

Two minutes later, the hosts worked an opening down their left with Charlie Wakefield and Morgan Williams found wanting and the ball dropped to Alfie Beestin whose effort was tipped over by Grant Smith.

What could at best be described as half-chances fell to Linton and Reckord at one end whilst Beestin’s effort from the edge of the box did little more than warm Smith’s palms.

The back five certainly looked stretched at times with Wakefield exposed on a number of occasions and on 13 minutes Reagan Ogle got the better of him to whip a ball in from the right and Andrew Boyce had a free header which went just wide.

There was what can only be described as ‘a full and frank exchange of views’ between Wakefield and Smith following. Perhaps asking quite what Charlie was doing at right wing back!

Unsurprisingly, when Scunthorpe found a breakthrough on 25 minutes it was from the left albeit Wakefield was not in attendance. Instead a free-kick broke out to the flank where Mason O’Malley delivered in and BOYCE rose highest to head home. The visitors’ defence certainly couldn’t say they didn’t see the giant centre half coming!

In the words of Adam Virgo (Gloverscast #182): “If you can’t defend set pieces in this division, you are going to struggle.” I’m not saying we can’t, but we definitely didn’t this time.

Wakefield lashed one over and Beestin (loves a shot from outside the box, that lad) has another from distance, before Wakefield popped up further forward on 34 minutes. Linton’s positive play found him on the right side of the box but he dragged his effort wide. Good chance.

A Reckord header that was comfortably held after Josh Staunton scooped a ball in to the box with two minutes of the half remaining was as good as it got for Yeovil.

It is difficult to know quite what to say. Defence looked like it hadn’t played together. Midfield bypassed. Up front….well, Linton or Alex Fisher barely saw the ball. The only positive I can find is it is only half-time in the first game of the season.

Having come out first after the interval (difficult to check for fleas in ears from this range) there was a change of shape and some more impetus from Yeovil going forward, though the hosts did seem to have less of a spring in their step.

Perhaps unsurprisingly, the change in shape saw Wakefield further forward and looking far more dangerous with Williams offering more cover on the right side and therefore looking more solid. If that is the last we see if that experiment, I will be quite happy.

On 56 minutes, the ball was worked out wide to Wakefield who beat his man and got in to the box to put a ball across the six-yard box. There was no-one there to apply a finishing touch, but Reckord was on his backside protesting inside the box. Have to rely on VAR for that one.

Shortly after the hour mark the home side doubled their advantage. From my vantage point at the other end of Glanford Park, I watched Jacob BUTTERFIELD pick the ball up in midfield and proceed to run in a gap as wide as the pitch and unleash a thunderous effort past Smith. The defending (if I can call it that) was absolutely criminal.

On 66 minutes, Perry limped off after a hefty tackle and was replaced by fellow loanee Sam Pearson, whose first effort saw his left-wing cross land on top of the net.

The most frustrating thing about that weak second goal was that it came after a much improved performance from Yeovil. I know, it couldn’t have been much worse.

But on 74 minutes, Linton got the ball forward with real positivity and the ball broke to RECKORD who coolly slotted home his first goal for the club. It was nothing less than the visitors deserved.

Three minutes later Fisher stretched but could not quite get on the end of a Worthington ball across the box. Then, on 88 minutes a great free-kick in from Worthington found Hunt sliding in and his connection was turned aside by Dewhurst in the Iron goal.

With Yeovil pressing forward in search of an equaliser, space (yes, even more of it) was left for Scunthorpe and they nearly made the visitors’ pay when Feeney and Butterfield combined for the letter’s shot to be turned over the bar by Smith.

Although improved in the second half, there was still plenty to cause concern for those travelling back to Somerset – and, of course, boss Chris Hargreaves. 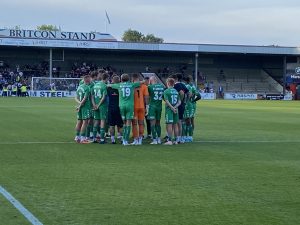