Conditions: Dry and sunny but a bit windy

The Glovers took the lead through a Dale Gorman penalty before the hosts pulled one back through Michael Clunan as the first half finished in disastrous style.

Having been pegged back, Matt Worthington was red carded for a strong challenge and then Yeovil old boy Gold Omotayo put the Linnets ahead.

The second half was something of a non-event until Munashe Sundire saw red for his second yellow on 70 minutes and then Wakefield struck a late equaliser.

The opening exchanges saw both sides finding each other out but when Tom Knowles broke down the left after five minutes he was body-checked by Munashe Sundire and the referee pointed to the penalty spot.

Dale GORMAN stepped up and made no mistake from 12 yards to put the visitors ahead.

Reuben Reid had an effort easily saved following good work by Sonny Blu Lo-Everton, who had been recalled to the starting line-up, presumably after impressing in the Somerset Premier Cup semi-final against Odd Down.

However, having gone ahead, the momentum was with the hosts with Theo Widdrington, the son of manager, Tommy, forcing Ted Cann in to action on 23 minutes.

Matt Worthington had the ball in the net five minutes later having been sent through by Lo-Everton,  but the next action saw King’s Lynn take the lead.

The move which led to the visitors’ equaliser on 38 minutes heralded two appeals for offside. One more convincing than the other, but the one that mattered  looked like it was off when a great pass Brett McGavin found captain Mark CLUNAN the wrong side of Mark Little and he fired past Ted Cann after 38 minutes.

Knowles put over with five minutes of the half remaining, but two minutes later Matt Worthington went in for what at best could be described as a full blooded challenge on Theo Widdrington and was shown a red card by referee Elliot Swallow. He did get some of the ball, but plenty of the player as well. Having been sent off in our opening game of the season against the same opponents, one assumes Worthy simply does not like playing against the Linnets.

Jordan Barnett replaced Lo-Everton with Neufville dropping back in to midfield, but more significantly the dismissal put further wind in to the sails of the Linnets.

Josh Barrett fired a shot over a minute in to injury time and it was the same player who created the opening to put the hosts ahead with three minutes of injury time played. Barrett got the better of Little and fired a shot which Cann spilled for ex-Glover Gold OMOTAYO who prodded Lynn ahead.

The fault for the goal was the goalkeeper’s but it was difficult to look beyond Marcus Duncombe’s comments about the ex-striker for the assist.

With Yeovil down to ten men and the home side ahead, it was no surprise to see the opening 15 minutes not muster any significant chances for either side.
In fact, the only talking point was injuries to Gorman who had a collision of heads on the edge of the box and then on 66 minutes what appeared to be a lunging tackle on Knowles by Tyler Denton.

But referee Swallow decided he would level up the numbers with when Sundire caught Neufville with a late tackle o 70 minutes to earn his second yellow.

Seven minutes later, a corner saw the ball floated to the back post by Gorman and Wilkinson, to this observer, seemed to be grabbed by the throat as he rose. Omotayo’s concern for his former team-mate, immediately calling for the physio, was not matched by referee Swallow. 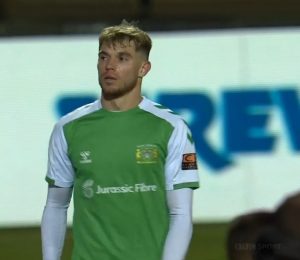 A second change saw Charlie Wakefield replace Neufville on 80 minutes and the substitute fired a shot over two minutes later.

The injuries turned in to seven minutes of stoppage  time added on and it was as the 90th minute ticked over that WAKEFIELD picked the ball up on the right and bent a beautiful shot in to level the scores.