Tom Knowles believes he has learned a lot from a “carnage” season as a key part of Yeovil Town‘s season.

The forward has played 44 times this season, surpassing his 38 appearances last season, and believes he has learnt a lot since joining in November 2020.

Speaking ahead of this weekend’s final home game against Boreham Wood, the 23-year-old admitted the current campaign has been a tough one. 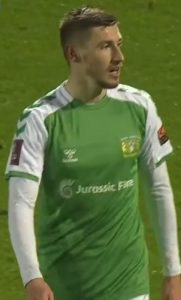 He said: “One of the main reasons I came down to Yeovil was to be in a first-team environment and to learn as much as I can about the game.

“I think I have done that in abundance because I think anything that could happen in football has happened to me during my time here.

“You have just got to learn as much as you can and take it all in your stride and learning off the senior players here really helps.

“They have been on this journey before so they can help you and guide you whilst you are learning about yourself. It has been tough but I have enjoyed it.”

The former Cambridge United man is one of a number of Glovers’ players who are out of contract come the end of this season, but said he hopes the side can sign off with victory over Boreham Wood in the final home game of the campaign this weekend.

He said: “It’s been a tough year for several different reasons and we know how football can bring everyone together.

“So if we can end with a high at home in front of our fans that will leave everyone with a positive feeling going in to the summer and looking forward to next year.“

Going in to that game, Knowles is on nine goals and admits he would like to take it to double figures with two more National League matches remaining.

He said: “I have never hit double figures before in my career so that would be nice, but as long as I am a cog in the wheel that helps the team win, I am happy. If I am the one that scores, sets one up or blocks one on the line, I am happy.”

What did we tell you, folks? Don’t fall in love with footballers?