Injured Reid is ahead of schedule

Reuben Reid is ahead of schedule in his recovery from a hamstring tear.

The Glovers’ striker has been missing since picking up the injury in a pre-season friendly at Weston-super-Mare and had been expected to be back in December. 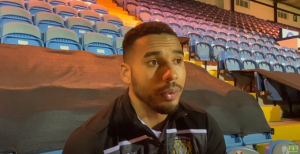 However, manager Darren Sarll said the former Exeter City and Cheltenham Town frontman had been in the dressing room throughout the season bringing an experienced voice for his side’s younger players.

Speaking ahead of the weekend’s trip to Solihull Moors, the boss said: “He is ahead of schedule and we are very positive about him making an earlier comeback that we first thought.

“He’ll be a massive player when he comes back and he’s been a joy to work with.”

Sarll said he received “a lot of warnings” about the 33-year-old before signing him last January, but described him as “a brilliant guy with a wonderful personality.”

The manager added: “No-one is this division or the one above is as good at keeping the ball as Reuben with his back to goal, so he’s been a big miss for us.”

As mentioned after the midweek win over Woking, defender Luke Wilkinson is expected to be involved in the game against fifth-placed Solihull.

The manager also confirmed that defender Alex Bradley, who has not featured since coming on as an 86th minute substitute in the 1-1 draw with Altrincham, trained on Thursday along with Sonny Blu Lo-Everton who was rested for win over Woking.

All three are expected to be involved at the weekend.