Hargreaves: Happy with fitness but lots to work on

Chris Hargreaves said he was pleased with the fitness level and mentality of his Yeovil Town side following the 1-1 draw with League One newcomers Exeter City at Huish Park today.

A Tom Knowles goal gave the Glovers the lead before they were pegged back by a Matt Jay goal shortly before half-time with the second half seeing a flurry of changes on a very hot day in Somerset. 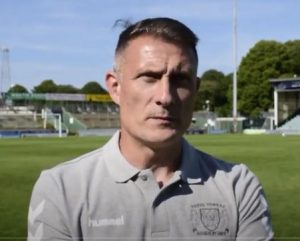 Speaking after the game, the manager said: “I was really pleased, we were resilient, looked a threat at times and were in the mindset of working their socks off all day.

“We are a fit bunch of players and even in the second half when we were making changes and putting out a team of young boys and trialists, they bought in to it with the mentality we have and the fitness levels.

“There is lots to work on, we could keep the ball better at times, but (new signing, striker) Alex (Fisher) has added a different dimension because you have a focal point which you can look to at times.

“But the main thing today was the fitness levels and attitude which was spot on.”

The boss said he expects his side to play “percentage football” when the National League season kicks off in three weeks time.

He told the Gloverscast‘s Ian Perkins: “I don’t think we can be obsessed with the way we are playing, we want to play the right way but in this league we have to play percentage football.

“We’ve also got to add to the squad, so we can only do what we can do at the moment is how I would summarise it.

“We are trying to work on a couple of things to give us a couple of options in the way we play and I was pleased with some of it.

“Against a good opposition (in Exeter), you are not going to dominate the ball, so to have that type of resilience was good.

“What I would like to see in more games is more play in the final third, more shots on goal and more crosses, but that is difficult against a good side.”

Hargreaves is still looking to add more to the squad with four more trialists getting an outing against the Grecians.

Ex-Torquay United full-back Chiori Johnson played 70 minutes in his second appearance having played in the midweek draw at Taunton Town, and forwards Pierre Fonkeu and Stanley Anaebonam also appeared after the break.

Fonkeu appeared against Taunton and was most recently with National League South side Hemel Hempstead and had a spell at W*ymouth (which we’ll not talk about),whilst Norwegian Anaebonam most recently played in the Irish League with Shelbourne.

The manager said: “We still have a couple of add and we are working hard to do that at the moment, but on today’s evidence the application was evident.”

New signing striker Alex Fisher played 75 minutes against one of his former clubs and impressed his manager.

The boss said: “Alex wants to be here and that is something I have maintained with the lads we have talked to, they have different reasons for being here.

“The captain, Josh Staunton, wants to leave a legacy of his time at the club which is great because you can go back to the era you are at with Yeovil and you are well thought of.

“I love that because it means you are absolutely up for the challenge, so I am delighted to have him.

“(Full-back) Jamie Reckord has been fantastic since he joined, as has (striker) Malachi Linton, they have shown me why they wanted to come here.”

Playmaker Lawson D’Ath sat out the friendly at Huish Park having missed the Taunton Town game, but Hargreaves insisted the knock was “nothing to worry about.”

He said: “I have a lot of sympathy for Lawson because he’s had a couple of pre-seasons where he’s not been able to get fit, some with serious injuries and some with bad luck.

“He just had a reoccurrence of an injury, ever so slight but we have to make sure when he gets back, he gets back fully fit.

“Nothing to worry about, just a frustration really.”