Chris Hargreaves’ first match as manager ended in defeat at Scunthorpe this evening and he was disappointed with the result but praised the bravery of his players – and reiterated the need for additions.

Speaking to the BBC’s Sheridan Robins, the manager said: “[I’m] disappointed, so are the lads, bitterly disappointed. I think we did enough. We changed the shape, maybe we were a little bit on the backfoot [in the] first half, just too protective. A lot of lads probably just on a fine line between being able to play or not. They did well to even be on the pitch a couple of them.”

The Glovers went 2-0 down before Jamie Reckord scored a consolation and they certainly created chances to find an equaliser. Hargreaves thought once his side were calmer, they improved. 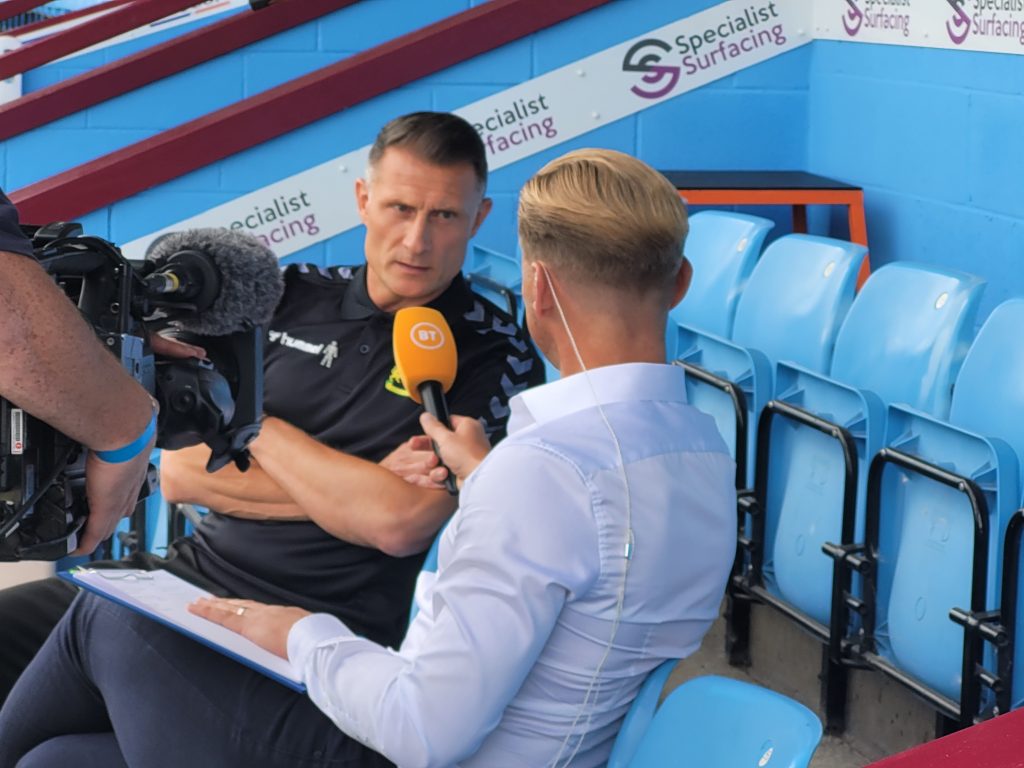 “It was an okay performance, once we go the belief and once we were calmer on the ball and switched play and did what we’ve done in a lot of the pre season training sessions and games. We looked excellent, we looked a threat, we looked like we had width, we looked like we were going to score a second goal.

“I’m baffled as to why we couldn’t get on the end of one of the crosses, numerous corners, chances. It was front-foot football and I always reference the fans at the end of a game cos they usually tell you what they done and I have to thank them for their support today, they were absolutely brilliant.”

Jacob Butterfield’s second half strike was one that the defence will not want to watch back, and the manager admitted it was a poor goal to concede.

“I think the second goal was a killer, really, because of the backing off. We lost the ball when we probably think we’re in good possession. We’ve still got to react, we’ve still got to get back in numbers and some point someone’s got to transition to go and press and try and affect the ball and we didn’t, so that was really poor from us,” he said.

Following the departure of Tom Knowles on Thursday, there is a clear need for additions in the squad and Hargreaves is determined to add.

He said: “I’m still going to be on the phone all next week, because we want to add to what we’ve got, we’ve got to add to the quality we have, we just need a little bit more to be able to go into a full season with a squad of real depth.”

When asked by our very own Ben Barrett about if he was looking to add experience to his squad, Hargreaves said: “Experience costs a lot of money, in the main, and we have to cut our cloth to our own club and our own finances. And, I maintain that we cant be frivolous because you can’t exist as a football club because someone’s got to put the money in and it’s a lot of money to run a football club. I would love millions of pounds, everybody would. But, the reality is, we want to be competitive with what we have, and we were today.

“So we’ve got to get that recruitment right and try and get the players in. And I can assure you that 24/7 for the last six weeks I have tried to do that. Its fallen through a couple of times at the last minute which is disappointing, which happens, but lets hope it doesn’t fall through next week,” he added.