Joe Edwards has revealed he knew that Yeovil Town would book their place in the League One play-off final from the minute he ran out for the warm in the semi-final second leg against Sheffield United in 2013.

The former Glovers’ midfielder and captain has spoken about the 2-0 win over the Blades on the latest edition of the GloversPast. 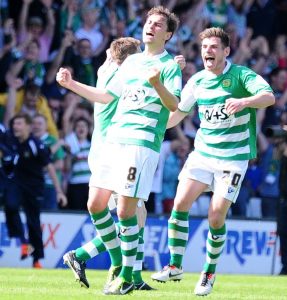 Speaking ahead of his first return to Huish Park with Plymouth Argyle in this weekend’s pre-season friendly, he said: “Coming out before the game you could just feel the atmosphere, I had never felt anything like that.

“Even though it was a smaller stadium than I had played in before or after, that was my favourite warm up ever.

“It was packed as soon as we came out, I knew we were going to win from that moment, it just had that feeling and we replicated that with the way we started.”

You can listen to Joe talk about his time at Huish Park including that magical season in the latest edition of the GloversPast below.