Former Yeovil Town striker Kevin Gall has called on supporters from across the South West to fill Huish Park when a Glovers’ Legends side takes on a South West Legends XI in a match in memory of Adam Stansfield.

Gall and co-organiser and Yeovil fan Abby Carter have confirmed the long-awaited match will take place on Saturday, May 14 (kick-off 2pm), the day before the final National League fixture away at Altrincham.

It will raise money in memory of Stansfield, a member of the FA Trophy-winning team of 2002 who died of bowel cancer in 2010 aged just 31. 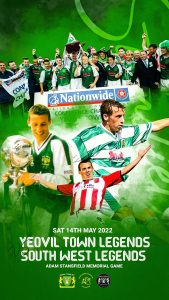 The game will also be a moment to remember many people who we have lost in recent years including Ciderspace co-founder, Martin ‘Badger’ Baker, captain Lee Collins and former staff members Stuart Housley, Bruce James, Maurice O’Donnell and Tony Trott.

Speaking to the Gloverscast, Gall said: “This game has been two years in the making, it seems like forever but finally we are delighted we have finally got a date.

“Now it we really need everyone’s help to share it far and wide to supporters of Yeovil but all Stanno’s former clubs – Exeter City, Hereford, Elmore, and clubs from across the South West.

“It’s so important we fill Huish Park for Stanno and the unbelievable people we have lost over the last couple of years who dedicated their lives to Yeovil Town.”

He added that in the next few weeks there would be announcements around which players are turning out for both teams with a number from Yeovil’s most successful sides from years gone by expected to turn out.

Gally has also confirmed he will be bringing his boots – and has said he’ll bring back the tramlines if we can raise a good amount for the Adam Stansfield Foundation. That’s the gauntlet being thrown down, folks!

There will also be a match between a Yeovil Town Supporters’ XI and their Exeter City counterparts taking place at 10.30am on the day.

Details of tickets “will be available shortly and all previous agreements and purchases still stand“, the organisers have confirmed.

The game had been scheduled to take place in May 2020 but had to be cancelled due to restrictions around fans being allowed in Huish Park due to the COVID-19 pandemic.

The Adam Stansfield Foundation was set up to give young people the opportunity to develop life skills and raise awareness of illnesses caused by bowel cancer.

The game had been scheduled to take place in May 2020 but had to be cancelled due to restrictions around fans being allowed in Huish Park due to the COVID-19 pandemic.