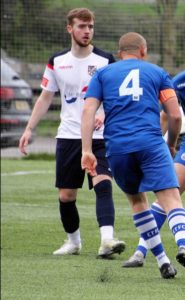 The whereabouts of exiled winger Gabby Rogers appears to have been cleared up.

A player by the same name turned out for Willand Rovers, a Southern League Division One South club based in Cullompton, near Exeter, in a friendly match at Clevedon Town on Friday night.

The team-sheet posted by Clevedon Town shows Gabby appearing as a number 10 for the visiting side.

Clevedon won 3-0 in the friendly fixture.

The Torquay-born winger has not featured since coming off the bench in the 3-2 FA Cup defeat at Stockport County in late Stockport.

Speaking in his pre-match press conference ahead of Yeovil Town’s National League fixture with King’s Lynn, Glovers’ boss Darren Sarll was asked about the whereabouts of Rogers.

He said: “Nothing has changed from the first time around. I will only play players who want to play for the football club, it does not matter who it is. We want to produce a group of people that are highly committed to the club. Gabby was (committed to the club) but things change.”

If this does mean Gabby’s time as a Yeovil Town player has come to an end, all of us on the Gloverscast wish him the best for his future career.