The Glovers’ Trust has called for supporters to protest against the ownership of Scott Priestnall ahead of the final home match of the season against Boreham Wood this weekend. 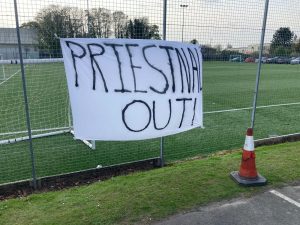 The call follows the Trust’s regular Pulse Survey which showed that 90% of respondents supported further protests following action taken during and after the recent match with Stockport County, where the chairman was present.

In a statement issued on Friday, the board has encouraged supporters to take the following action:

The statement added: “We know that many fans are frustrated. But, we must maintain our integrity and keep our protests peaceful.

“Whether you are a member of the Trust or not, this is our last home league game of the season, and the last opportunity for us to make our feelings known as a collective.

“Whether the chairman is in attendance or not, let’s make our voices heard.”

Two weeks ago, Priestnall made an address to a group of supporters in the Alec Stock Lounge ahead of the Stockport game – see here.

Since then there has been no further updates to supporters around the potential sale of Huish Park to South Somerset District Council or the club’s vacant managerial position.

The Gloverscast had agreed to interview the chairman on our podcasts last Friday (29 April) and today (May 6) with statements from the club telling fans the chairman would be speaking with us.

Both interviews have been cancelled by the chairman.