Well, what a night under the lights and on the Beeb that was. Here’s are Ian’s Five Conclusions from a special night at Huish Park…

That was a proper FA Cup match. Huish Park was bouncing from kick-off with the supporters right behind the boys in green and white. There’s something special about FA Cup ties at Huish Park and last night was no different. The atmosphere was electric throughout and when Charlie Wakefield smashed the ball home, the roof came off. 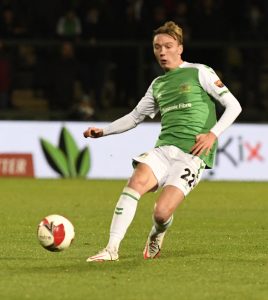 Can we keep Dan Moss forever? Another man of the match performance, a goal-saving tackle and a performance far beyond his years. Our history of developing loanees is continuing with Moss. He’s falling into the category of Steven Caulker, Connor Roberts, Shaun MacDonald and others as loanees who are ‘ours’. Moss has been impressive from his debut and he’s just growing in this team. If we can’t get his loan extended, there’s going to be a massive hole in our squad without him.

Reuben Reid is going to improve us. Reid’s return from injury feels like it’s coming at a pivotal time. Adi Yussuf struggled to make an impact in the first half. He put himself about but didn’t really produce. He was key in for Charlie Wakefield’s goal though, keeping the ball away from Stevenage’s defenders and moving the ball to Sonny Blu Lo-Everton. Reid’s introduction, cheered by the Huish Park faithful, was welcome and in the short time he was on the pitch he showed what he was about. He held the ball up when we needed to kill time, he out-muscled defenders and he was always looking for the ball.

Clarity is needed. Prior to the match, social media was awash with rumour and speculation. Scott Priestnall has obviously checked out of Yeovil Town Football Club. He hasn’t been seen at a match since Chesterfield. The sooner he comes and out says he wants out the better. What this small squad of players and manager are doing with finite resources is nothing short of miraculous, but the lack of leadership from Priestnall is seeping it’s way into the manager’s press conferences now and that’s not right. Is he hanging on for a plum FA Cup tie? Is there a third group? Is Glenn Collis still at the table? What’s happening with Simul Sports? No one really knows except the people negotiating.

I think I was wrong. At the end of October, after our torrid run of results at Huish Park that culminated in the draw with Weymouth and I thought the writing was on the wall. We looked lost, we lacked identity and ideas. Since then, it’s been unbelievable. Darren Sarll has turned it around in a huge way and I’ll gladly eat humble pie. These players have struck form and are an infectious group. Well done Darren – and sorry!