Yeovil whimpered out of the FA Trophy at the hands of Needham Market yesterday. I soaked it all in and fortuitously managed to condense it in five conclusions.

Well, that wasn’t very good was it? It goes without saying that losing to a team in the Southern League Premier Division is unacceptable for Yeovil Town Football Club. The game should not have reached a penalty shootout and we should have had enough about us to put them away. But, as everyone knows and Darren Sarll said, on the day it’s 11 men vs 11 men and Needham Market’s 11 men earned victory. Too many players performed far below the level expected and we were the ‘giants’ that were killed on this occasion.

It’s blindingly obvious but we’re horribly out of form. We’ve gone through this pattern before. A good run of form followed by a rough patch of form. We need to get out of this patch sooner rather than later if we’re going to keep within touching distance of the play offs. How we get it back, who knows? Darren Sarll didn’t seem hopeful of any additions any time soon, which we obviously need. Once again, we’re round to talking correlation between what happens off the pitch and how important it is to what happens on it. We’ve gone from nine subs to four in seven days and the manager needs reinforcements. 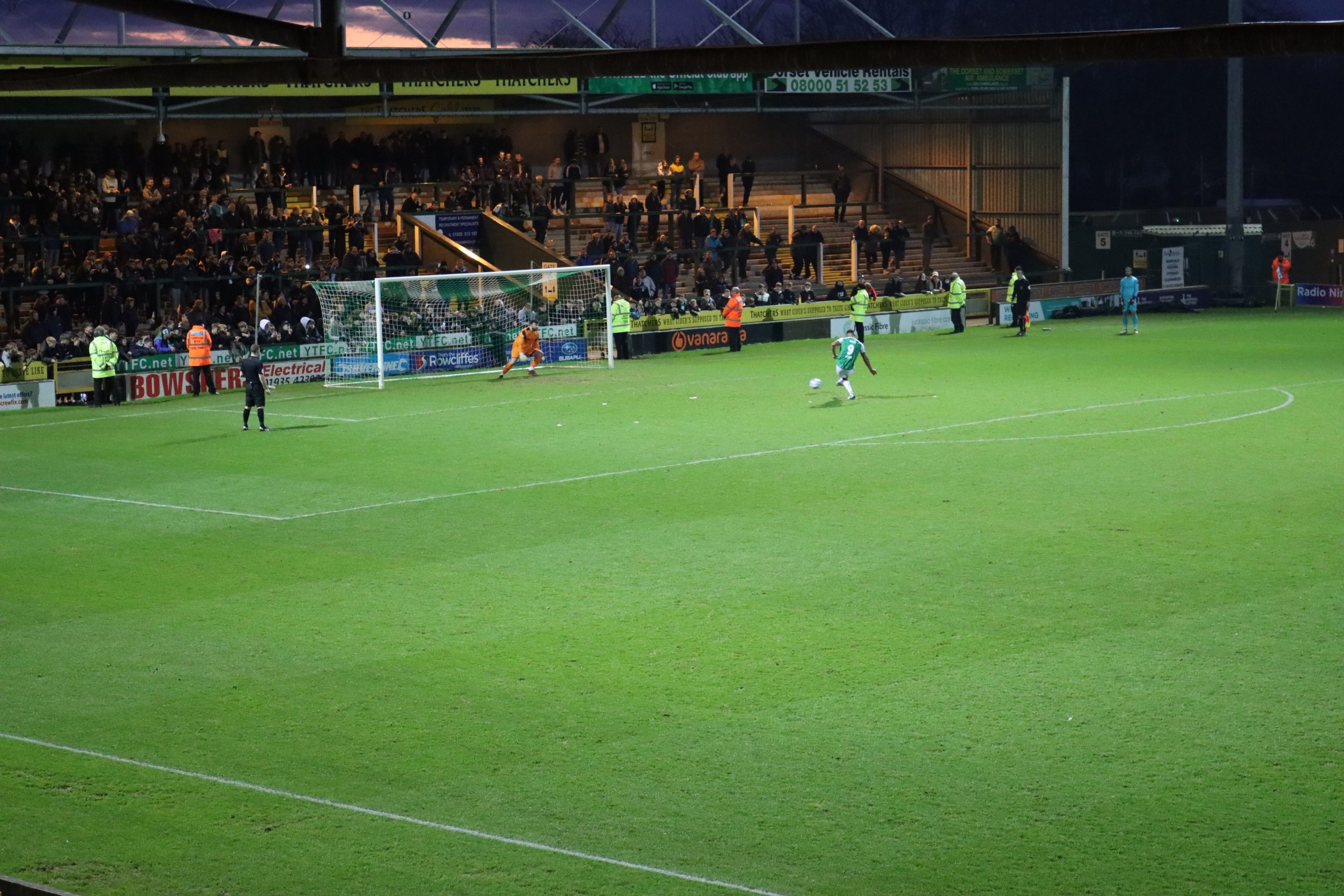 Oh, Reuben. This wasn’t a performance of the rejuvenated Reuben Reid we’ve been anticipating. This match was Reid’s return to Yeovil in a nutshell. Loose touches, misplaced passes, a lot effort but a lack of quality. His penalty was disappointing and summed up his afternoon. This isn’t the Reid who was training almost immediately after the 2020/21 season finished. This is an experienced pro, at the latter stages of his career recovering from a serious hamstring injury having to start from square one again and get himself match fit in a side which is on a bad run. And instead of being able to be eased back into it, we’re reliant on him to come back into the team and drag us out of a mess.

There was a feeling of deflation around Huish Park. Perhaps it was the contrast of 8,000 last Saturday versus 1600 yesterday, but the rumours circulating before kick-off about Terry Skiverton’s departure (coupled with his notable absence during the warm up) certainly took the wind out of my sails. To lose a legend like Skivo in the middle of the season, without a proper send off is really sad. It’s not how I thought it would happen and I daresay it’s probably not how he thought it would happen. His departure is sad for supporters and also the players he works with on a daily basis and the staff he’s worked with since joining Yeovil in 1998.

Darren Sarll cut a frustrated figure. It felt like Darren was on the cusp of saying what he really felt about the situation after the match yesterday. That’s not to say he doesn’t normally, he clearly does. But, what must have been a highly emotional week for him has ended in, probably, his worst defeat as Yeovil manager. He’s lost his assistant (and friend), he’s lost his captain to injury and the team he’s worked miracles with so far appear to be in a rut. Next weekend we welcome Wrexham to town which will undoubtedly demonstrate the gulf in resource, but we did ‘em last time didn’t we?!