A 1-0 win over Barnet in miserable conditions with a referee who wanted to be centre of attention was far from a classic, but it did move Yeovil to within two points of the play-off places with a game in hand over many teams above them.

Here are Ian’s Five Conclusions on an eleventh match unbeaten….

Dale Gorman’s importance to this team is understated. I touched on this during last Monday’s

podcast. Like many of this team, Gorman has taken a bit of time to make his mark but he’s well and truly doing it now. His assist for Yussuf was a deliciously-flighted cross to the back post with his weaker foot and it invited the Tanzanian to head home. He played, in match where he really had to concentrate, on a yellow card from the 22nd minute. He moves the ball nicely, keeps the game flowing and he has the edge that Darren Sarll likes his players to have. We can’t afford to be without him, and I think if we were to lose him for a game or two, we’d really notice his absence.

That FA Cup atmosphere wasn’t there. What a difference seven days make. A gate of 2024 (with 98 away fans) meant there were less than 2000 Yeovil 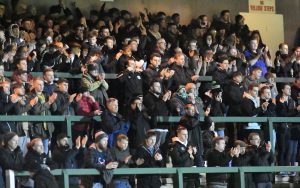 Town supporters in the ground. That electrifying atmosphere wasn’t there. There’s a new variant in town which might ruin Christmas, thus people could be taking extra precautions, but this is an in-form team without a loss in 11 matches who are on the verge of the playoff positions and in the 3rd Round of the FA Cup. We all know what needs to happen, though.

As matches go, this wasn’t the most enthralling. It was pretty bleak conditions at Huish Park, with two teams looking to break each other down. Barnet were restricted by our ever-resilient defensive unit and our huff and puff attack didn’t create many clear cut chances. It made for a rather drab affair which was made entertaining (apologies for the Rule #1 break here) by a referee who insisted on being the centre of attention. Ephram Mason-Clark’s red card and the subsequent booking of four members of the Barnet coaching team was the pièce de resistance of refereeing performance art from Ryan Atkin.

We should have killed the game off. Yussuf’s opener was the perfect start, and our performance in the first

part of the match suggested we might do something special. As it happened, things evened out and it was a tough game. While we didn’t create and clear cut opportunities at goal, there were moments when we could have put the game to bed. Worthington teed up Gorman centrally, on the edge of the box, but Gorman miscontrolled and couldn’t get a shot away. Knowles could have put Lo-Everton in on goal but didn’t get his pass right. Lo-Everton was put through by Yussuf and worked a decent effort into the side-netting. Those moments would make things a little less stressful if they resulted in goals.

Wilkinson, Max Hunt, Dan Moss, Morgan Williams and Josh Staunton were the obvious standouts in their defensive duties yesterday. But the  way Yussuf, Wakefield, Lo-Everton, Worthington and Gorman press is a real difference maker. We know this team work hard for each other, but the confidence they’ve given supporters when we’re 1-0 up is remarkable.