By: Ian Perkins
In: Gloversblog
It was another tough afternoon for the Glovers on home soil, with Yeovil falling to a 2-0 defeat against play-off pushing Grimsby Town. Here are BBC Somerset’s Sheridan Robins‘ conclusions from the match.
It has been glaringly obvious the issues for the Glovers but the pressure on not being able to score means defensive errors are creeping in. When you know your strength isn’t up top, there is only so long you can be so impressive defensively. The defenders this season have certainly earnt their money and have done more defending than most teams – and eventually something has to give with the reliance on a strong back four becoming too much. Both goals were avoidable, with the second the most disappointing from a corner. There is no doubt if the team were able to find the back of the net, the defensive line would be a lot more comfortable – it is a team game after all.
The players are putting their bodies on the line. 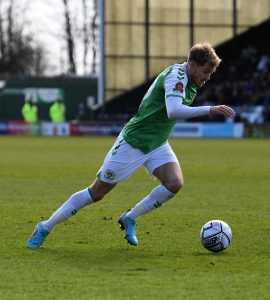 Reminiscent of last season when Lawson D’Ath played a full 90 when he really shouldn’t have, players are entering the business end of the season with a whole heap of minutes behind them and bodies which could do with a rest. Charlie Wakefield – for example – has racked up considerably more minutes than his last few seasons combined but must play every week. It cannot be an excuse, of course, but Grimsby were able to make five changes and keep their usual system – this is not possible for Yeovil and the manager knows they are putting everything in when their bodies are screaming at them. That commitment doesn’t equal points, but it explains why fans are still so fond of this team, despite the form.

I think it is fair to say there are few midfielders better with the ball to feet in the National League than Lawson D’Ath and it was a masterstroke to keep him around the club and support his recovery. His delivery from corners was just what Yeovil had been missing and his ball retention is unbelievable. Another 60 minutes in the tank yesterday and I hope we continue to see him shine in the next few weeks. There may be little to play for now, but for the purists watching him play is a joy – his anger at referees et al.

Yeovil are now solidly midtable and so Darren Sarll can and will mix it up. I liked the impact of the diamond early on and the back three was something we haven’t seen since the opening day. It might be something that can impact us and as the manager said after the match, if you keep things the same, the same things could keep happening. I will – of course – be at the games for the rest of the season and I would like to see us go for it, take games to teams and impact other team’s seasons. We had more possession than so many games this season against Grimsby and I enjoyed seeing Yeovil with the ball – but the key is punishing teams when we do. I expect a raft of changes over the next few weeks (within the constraints of the small squad of course).
Lastly, Huish Park has such potential but needs more. The Her Game Too dedicated fixture meant a lot to me personally and the players embraced what it meant, while young girls’ teams took to the pitch before kick-off and at half time. This is something the club need to do more of as it is so important – but the place needs some love. The staff are working as hard as they can, but they can’t do it all. As Geoff Twentyman said yesterday, BBC Bristol/Somerset are trying to talk to the hierarchy but to no avail. Certainty is needed for future fans, current fans and the players, manager, and staff. But, I am so proud the club has embraced the Her Game Too campaign so brilliantly – there are so many amazing women at the club working so hard and they deserve to be celebrated. I am sure I echo everyone’s views when I say seeing Pat Custard being on the front of the programme was a joy.