It was another disappointing night at Huish Park as Yeovil Town collapsed to a 3-0 defeat against Dagenham & Redbridge to leave them third from bottom of the home form table over the last six National League games.

We were masters of our own downfall. The positive of our season so far has our security at the back and the strength of our defence. We let an in-form Paul McCallum have freedom of the six yard box and didn’t close down the cross with any determination after just 6 minutes of the match. That’s not a character-trait of this side so it was unusual. To then concede a 2nd goal and in such ridiculously poor circumstances quarter of an hour later meant the game was over before half time. We know we have issues in the final third, and we haven’t scored two goals in a game since November. We shot ourselves in the foot and it felt like the players on the pitch knew the game was gone.

We struggled going forward again. We welcomed Olufela Olomola back to the starting line-up, but it was that familiar story of a lack of service. Conceding so early meant we were chasing the game but we never seemed to have cohesion going forward. Charlie Wakefield and Tom Knowles seemed out of sync (and totally exhausted), the midfield trio of Josh Staunton, Dale Gorman and Alex Bradley looked like the new combination that it is and never really clicked. We brought Lawson D’Ath on at 2-0 to bridge that gap between the midfield and the attack and attempt to claw back the deficit. Unfortunately, three minutes later we’re asleep on a quick throw and Dagenham put the game beyond doubt, although it was already.

Dagenham & Redbridge nailed it tactically. From kick off they applied pressure to our defenders whenever we had the ball. It took us quite a few goal kicks to cotton on to the fact that they weren’t going to let us play out from the back. Every time Josh Staunton picked up the ball from a defender there we two red-shirts on him looking to force the mistake, and they did repeatedly. At 2-0 they knew their work was done and when we did have the ball in their half, they let us keep it, perhaps knowing that we’d struggle to break their solid back line down. All in all, it was a comfortable night for Dagenham.

I’m not sure where we go from here. The last three results have cemented that we’re definitely 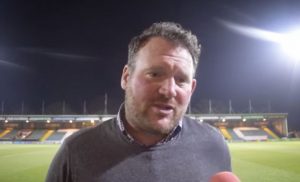 mid-table and any run on the playoffs would need a miraculous set of circumstances. A couple of weeks ago Darren Sarll said his side’s seasons don’t peter out, last night was the epitome of a team petering out though. Unfortunately it’s entirely understandable. This squad is slap bang in the middle, most of them are out of contract at the end of the season and the vision from the boss at the top of the club is non-existent.

I’m not sure if we ever totally freed ourselves from it, but apathy has set in again. The early goal sucked any life the supporters at Huish Park might have had, but there was a real flatness last night. Like the players, the crowd never got going and were given very little to get going about. We slept walk out of the Football League, and if we don’t drastically improve in front of the home fans on Saturday against Grimsby, there will be a perception that we’re sleepwalking to the end of the season and after that who knows what? A statement in ‘due course’ means nothing. Seven day deadlines mean nothing. If the plan to be so distant and become so unaccountable that supporters just give up, we could be close to that point. We’ll continue to clamour for clarity and at this point we need it either way.