It was another defeat for Yeovil Town on Tuesday night as we went down to our fourth loss in a row at Southend United.

Here one-time Gloverscast quiz champion and Glovers’ supporter Ed Turnbull was among the 80 hardy souls in the North Stand at Roots Hall, and here are his five conclusions:

Unfortunately, the most obvious takeaway is the performance level was substantially lower (at least for the first hour) than what we were treated to during our stunning 12-match unbeaten run. The first half in particular, we had very little fluidity in attack and invited Southend onto us, struggling to get anything resembling a foothold in the game. To make matters worse, our defence seemed nowhere near as solid as the backline that stood firm to bombardments from the likes of Solihull, Bromley and Wrexham in previous away games this season – Southend could easily have scored more than two. Various wise heads including Darren Sarll and Ian Perkins have referred to the team looking tired of late, and this was further proof. Mind you, it must be said that Southend seemed a lot better than a team that has spent most of the season battling it out with W*ymuff for 20th place.

Things improved significantly with the introduction of Joe Quigley and Reuben Reid (if you ignore for a second the fact Southend made it 2-0 right after they came on!). Adi Yussuf very rarely, if ever, got the ball to stick to him, and nobody was surprised when the fourth official’s board went up with a red 23 next to a green 10. I think getting the ball under control back-to-goal isn’t one of Quigley’s strengths either, but he’s negated that possible weakness by instead looking to win flick-ons for team-mates to run onto (take his assist for Yussuf’s goal against Eastleigh as a perfect example). Last night I was very impressed how he seemed to win every header against big centre-halfs, and it gave us (often Reuben Reid to be precise) a platform to work off, that saw us become a lot more threatening and gave us a fighting chance of getting something from the game. Quigley was also unlucky not to score himself when he did brilliantly to make space for a shot, which was excellently saved. I’ll be picking Joe ahead of Adi in my next FanHub line-up predictions in the future, for sure (unless Quigley get’s injured, I suppose).

Ordinarily, you’d probably say that the phase of play which ended with us scoring our only goal was the best 15 seconds of the match from a Yeovil point of view. But on this occasion I would argue it was the worst, and that’s because Luke Wilkinson went down innocuously immediately before we scored. I didn’t see whose shot it was from the edge of the box (sounds as though it was Wakefield’s) that wasn’t gathered by Southend keeper Steve Arnold, and Reid nudging in the rebound was only in my peripheral vision, because I was more focused on our captain clutching his leg in obviously severe discomfort. If you look at our record in National League games this season, I make it now W7 D1 L2 when Wilkinson has played the whole match, compared to W2 D3 L6 when he hasn’t – I think that’s enough said about how big a miss he’ll be. If anything, I was relieved to hear Sarll’s prognosis of “a good six weeks“, because I feared it could have been even worse. 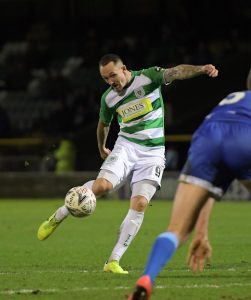 Rhys Murphy did not get a welcoming reception from the Yeovil fans, it’s fair to say. Perhaps it’s understandable after his absence at the end of last season which did leave a sour taste in the mouth. Murphy later stated this was “due to some personal issues“, and given we’ll probably never know what he meant by that, one could argue he should be given the benefit of the doubt. Personally, I’d rather remember Rhys for his incredible return of 34 goals in 65 games, and for memories such as Torquay away (the 2-0, not the 6-1, if that wasn’t clear). The bloke literally scored a hattrick against W*ymuff, after all! He certainly showed enough quality last night to remind us what we’re missing. 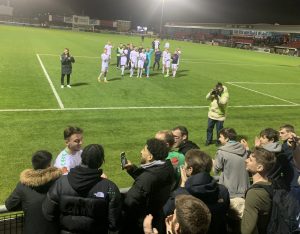 Lastly, and most importantly, I think it should go without saying we need to stick by these players. Yes, it’s four defeats in a row, but it’s also four defeats in our last 16. I fully agree with Darren Sarll when he says this young group needs to be positively supported rather than have fans on their backs if we want them to perform to the really high bar they’ve set in November and December as frequently as possible. These players seriously care about Yeovil Town FC, and that was shown again last night in the way we kept trying our socks off for an equaliser despite being visibly shattered and ending the game with 10 men after Wilkinson went off. On another day, the ref might not have penalised Max Hunt for a hand ball, Reid’s goal would have been an equaliser rather than a consolation, and the lads would have secured a heroic comeback for which we’d be singing their praises.