The curse of the old boy struck again as former Yeovil defender Alex Lacey headed home an equaliser four minutes in to second half stoppage time to rescue a point for Notts County on Saturday.

Glovers’ boss Darren Sarll said his side were “magnificent”, Tom Knowles said we deserved the three points, but the history books will show we had to settle for one at Meadow Lane.

Darren Sarll wasn’t gutted at what can only be described as two points dropped, but admitted his players were. I have to say I am siding with the players.

This was  another hard luck story for this Yeovil side.

Despite my disappointment, I found myself standing, applauding and cheering this team at the final whistle.

It is just impossible not to be impressed and heartened by the sheer tenacity of them, they just never stop working.

As the game ticked past the 90th minute, Charlie Wakefield appeared in the left back position to win a ball back and clear it. Yes, our winger-turned-striker Charlie Wakefield who has played so many minutes this season, he was tracking back and helping out his team-mates.

How can you do anything but admire that spirit? And be so, so frustrated that it was not rewarded with three points. I know, again. Ugh.

The disappointment stings more because this was another good performance against one of the National League’s top teams.

I’d have taken a point before kick-off, especially when I saw there was no Olufela Olomola in the squad. How we missed him.

This was a Notts County which “has not scrimped” on its budget, according to Magpies’ fan Paul Mace who we spoke to pre-match, with a team we were told would control the game with easy-on-the-eye football.

It didn’t happen and it didn’t happen because Yeovil Town did not let it happen. We hassled, we harried, we disrupted the rhythm of a team with quality and experience in abundance. If you saw the win at Stockport County earlier this season, this had a similar feel. We showed Notts County no respect, the difference between this and Stockport was players feeling the rigours of a season – and no-one in any kind of scoring form.

It did not make for a game of great quality, but with our team which is all about effort, that speaks more for our efforts. 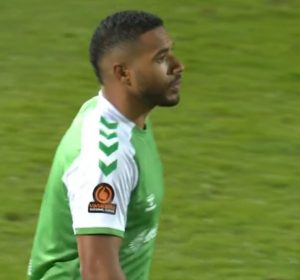 On that point, my thoughts on last season’s Reuben Reid were clear.

This season, I was willing to give him a chance and take fully in to account the fact he had an interrupted start of the campaign to put it mildly.

But, Reuben’s mistake at the end of this match was simply not acceptable. A burst forward by Lawson D’Ath, fed the ball through to our experienced striker who we are told has incredibly high standards, and he allows the ball to run under his foot and away to safety.

This was moments after the Notts equaliser and was a golden opportunity to get a shot in on goal. Yes, it is one mistake for a player who was on the pitch for less than 15 minutes, but he is paid to get that shot away. If his standards are as high as we are told – and I have no reason to doubt they are – he will be equally infuriated at his mistake.

The fact we played three midfield players – one of whom, Jordan Barnett, started the season as a left back – tells you all you need to know about our scoring options.

So, it was pleasing to see a goal of great quality from Alex Bradley.

We’re told he sees himself as a midfield player rather than the right-back we thought we signed and if he carries on performing like he did here, he very well could be.

There was nice passes, quality runs forward, strong tackles. There was a lot to like about Alex Bradley’s performance.

Finally, it was pleasing to hear Sarll and Tom Knowles praising the travelling fans at Meadow Lane.

Even when we weren’t winning, they were making a noise in an otherwise quiet Meadow Lane.

Every one of those 223 people in that away end were magnificent – well, let’s say 222, it’s a bit big-headed to call myself ‘magnificent’! We are supporting a team which in reality has nothing left to play for with promotion out of our reach and relegation almost a mathematic impossibility, yet we still turn up and make a racket. At the final whistle, the vast majority stood to applaud the players’ efforts and chant the manager’s name. There’s a huge effort going in on the pitch, but it is being matched in the stands.