After the past seven days at Huish Park, there was talk from the Barnet side of convincing victories coming their way but did we expect anything other than this Yeovil Town side to turn up at The Hive?

Goals from Tom Knowles and Reuben Reid earned a 2-2 draw in North London at the weekend, and here are Coatesie‘s conclusions on what he saw from the away end….

After the week they have had with the exit of Darren Sarll and remembering former captain Lee Collins a year after his death, Yeovil Town’s players could have found an excuse for sub-par performance. But, this group of players never fail to give it everything they’ve got and they did that once again.
If this was a ‘dead rubber’ match between two mid-table sides with little threat of troubling the top or bottom of the division, get me along to more of them because it was thoroughly entertaining and that was down to the desire of both sets of players.
Glovers’ caretaker manager Charlie Lee has promised that he will make sure his players give absolutely everything in every match he is in charge of and after his first 90 minutes there can be no questioning the commitment of this squad.

However, this was not the vintage performance we have seen in our last couple of outings against Southend or Bromley.
Reuben Reid summarised it perfectly when he spoke after the match and said that the start and the finish from his team-mates was on the money, but the bit in the middle needs some working on.
Both goals conceded will have been a disappointment to both Charlie Lee and his players as on both occasions Barnet seemed to waltz through out midfield without too much challenge.
For the first goal, Morgan Williams was at fault against a very good player in Ephron Mason-Clark, and for the second there were multiple guilty parties for not stopping the hosts’ attack.

Remember when scoring more than one goal was a problem? Nope, me neither. These last few games have seen us reborn in an attacking sense and seeing Tom Knowles’ desire to win the ball after just nine minutes, then tear forward and smash home the opener was fantastic.
Where does he get his energy from? All through the match he was a constant thorn in Barnet’s side.
And, yes, I have said I will judge Reuben Reid on goals this season (well, I did last season as well) and with two in his last two games, there’s nothing more I can say than – keep it up!

Perhaps one of the reasons for the reigniting of our attacking play is the arrival of Josh Neufville and Olufela Olomola and surely it’s time we saw Neufville and Fela given a start.
Charlie Wakefield looks to be trying so hard and it’s just not happening for him at the moment, so why not take him out of the firing line and give one of the loanees a start against King’s Lynn next weekend?

Lee spoke after the game about how Luton has told us to be careful with Josh and I am sure Hartlepool would not thank us for breaking Fela, but both feel like they need more opportunities to show what they are made of.

Finally, on Monday’s podcast I said the one thing supporters can do to help in these worryingly uncertain times was to turn up in numbers and make a racket and boy did we. 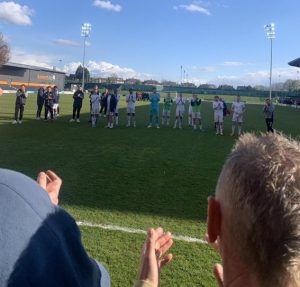 Every single one of the 288 fans in that away end did everything they could to show Charlie Lee and his players exactly what their efforts and this football club means to us.
I suspect we don’t need to tell show them, but at a time when these players who have put in so much effort appear to be being shown so much disrespect by others at the club – see here if you don’t know what I mean – it was great that we did.
And for those who either are or seek to be the custodians of this club, I hope you witnessed exactly what it means. History will judge you for your actions. Do not fail these people.