Glovers defender, Billy Sass-Davies has been the subject of much praise from him parent club’s manager David Artell. 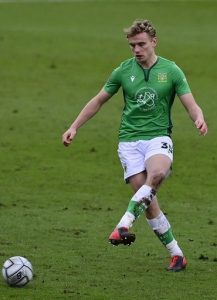 The Crewe boss spoke on Friday about the Welshman’s progression since joining on loan in February.

“He has gone down there on loan and held his place and it will be another great learning curve for him. It is one of the reasons why I have allowed Olly to leave us. Billy has got to be given his opportunity and I think he is ready.”

Artell added: “I will talk to him, to reassure him that him going out on to Yeovil is all part of his development. He has been placed on loan for that very reason, much in the same way Owen Dale was. “

At the time of writing, Sass-Davies has played 18 games for Darren Sarll’s side, scoring the one goal – against Barnet, he has also made his Wales Under 21s debut whilst on loan with the club and looks set to be in Crewe’s plans for their first team campaign next season.

More evidence that sending young talent on loan to Huish Park is of benefit to everyone, more of the same next season, please!