Glenn Collis has said he decided to quit his role as director of Yeovil Town after “months of soul searching and questions on the club’s direction.”

The club confirmed his departure from the board on Friday evening in a statement which revealed that chairman Scott Priestnall was “currently assembling a new board of directors.” 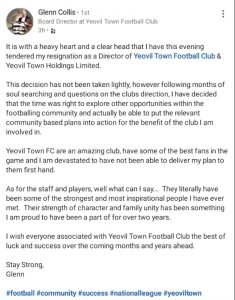 In a post on his LinkedIn profile, Collis speaks of his frustration at not being able to put his plans in to action.

He said: “This decision has not been taken lightly, however following months of soul searching and questions on the clubs direction, I have decided that the time was right to explore other opportunities within the footballing community and actually be able to put the relevant community based plans into action for the benefit of the club I am involved in.”

He added that he was “devastated to have not been able to deliver my plan to them first hand.”

The post concluded describing the club’s staff and players as “some of the strongest and most inspirational people I have ever met.”

He added: “Their strength of character and family unity has been something I am proud to have been a part of for over two years.”

Whilst it is questionable exactly what impact Collis had during his time at the club, he was a regular in the directors’ box at Huish Park and selected away games at a time his fellow director, Priestnall, was not.

Collis, 41, joined the board in February 2020 and was described as leading “one of Europe’s fastest growing sports management agencies and has also worked as a consultant to several of Europe’s most prestigious football clubs.”

He is registered as a director of Glenn Collis Limited, a company which lists  the nature of the business as “Other service activities not elsewhere classified.”

Announcing the departure of Collis, the club said the new board of directors being assembled by Priestnall would “include prominent local business people.”

It added: “We will issue a further update on board appointments in due course.”

Collis’ resignation epitaph ended a busy day of off-the-field news after it was revealed that South Somerset District Council is closing in on a deal to complete the purchase of the Huish Park site. Find out more – here.

That was swiftly followed by a petition launched by the Glovers’ Trust calling on the council to reverse the decision. To sign and share the petition – click here.