The Under-13s side representing the Yeovil Town Community Sports Trust went down to a 4-3 defeat at the Mid-Somerset Regional Talent Centre on Saturday morning.

The defeat in the Junior Premier League Under-13s Knock-Out Cup despite goals from Henry Lant, Moss Jackson-Collis and Harry Crittenden

The fixtures for the Trust’s Under-11s, Under-14s, Under-15s and Under-16s in the Junior Premier League, and the Under-18s trip to Bath City in the South West Counties Youth League all fell foul to the bad weather.

The weekend’s bad weather has led to the postponement of almost every youth team match.

Yeovil Town Under-18s match at Bath City in the South West Counties Youth League was postponed due to a waterlogged pitch.

UPDATE: Tomorrow's U18s @ytfcacademy match at Bath City @bcfc_academy has been POSTPONED due to a waterlogged pitch. #YTFC

Only the Under-13s representing the Yeovil Town Community Sports Trust are in action when they travel to the Mid-Somerset Regional Talent Centre in the Junior Premier League Under-13s Knock-Out Cup.

The fixtures for the Trust’s Under-11s, Under-14s, Under-15s and Under-16s have all fallen foul to the weather.

It was an unbeaten weekend of Junior Premier League action for the youth sides representing the Yeovil Town Community Sports Trust this weekend.

The Under 11s were held to a draw at home to Cheltenham Town with the Under-12s winning away at Bridgwater United. 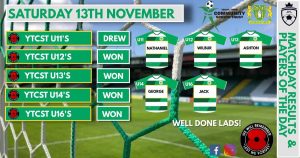 The Trust’s Under-13s, Under-14s and Under-16s sides all picked up wins over the South Somerset Regional Talent Centre, which bizarrely list Huish Park as one of their training centre.

We say bizarrely because the centre also advertises that a number of local Football League clubs scout their matches/training– let’s hope they weren’t there this weekend and the lads from the Trust stay in green and white.

It was the young Glovers’ first match for a fortnight following a postponement last weekend, although a number of players did feature for the first team in the Somerset Premier Cup win at Larkhall Athletic in the week. 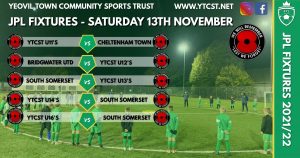 With both the Yeovil Town Under-18s and the Under-16s side not having a fixture, the two teams played a friendly at Huish Park on Saturday.

The match pitted the Trust’s Junior Premier League side against players in the Elite Player Development Programme (EPDP), effectively trialling for the Under-18s.

The match followed a week of trials held as part of the programme at the club.

The EPDP is run together with Yeovil College and offers Year 12 and 13 BTEC students play football whilst remaining in full-time education.

The Under-11s, Under-12s and Under-13s representing the Yeovil Town Community Sports Trust are all in Junior Premier League action on Saturday.

The under-11s travel to Yate Town (the YTFC-YTCST Derby?) with the under-12s at North Somerset Regional Talent Centre and the under-13s at home to Juventus Devon. 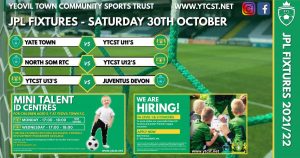 The Under-11s side representing the Yeovil Town Community Sports Trust were winners in their Junior Premier League fixture at the weekend.

They were in action at their counterparts from Saints Southwest.

The under-11s were the only age group representing the Trust in the JPL in action at the weekend. 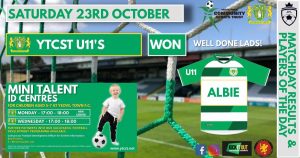 END_OF_DOCUMENT_TOKEN_TO_BE_REPLACED

The Yeovil Town Community Sports Trust’s under-13s side picked up a win in the Junior Premier League this weekend.

Yeovil Town Under-18s were without a league fixture and instead played a friendly match at AFC Bournemouth Academy.

The Championship side’s youngsters came out the winners but we are not sure what the final score was.

U18s @ytfcacademy travelled to Bournemouth today where they were beaten by a competitive side @AFCB_Academy The team made up of 8 EPDP and 5 school boys battled hard and were level at the break. A credit to the club. #YTFC 💚⚽️ pic.twitter.com/c000h2FnHO

Yeovil Town Under-18s are also without a fixture and have instead arranged a friendly against AFC Bournemouth Academy.

The young Glovers are presently fourth in the South West Counties Under-18s League after five matches. 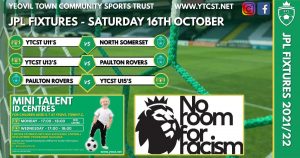 It was a disappointing weekend results-wise for the youth sides representing Yeovil Town with only the Under-13s picking up a victory.

Playing their second fixture in 48 hours following an FA Youth Cup exit on Thursday night, the Under-18s slipped to a 4-0 defeat at Swindon Supermarine in the South West Counties Youth League.

A double from Tadhg O’Callaghan and further goals from Benjamin Cleary and substitute Marc Mikuzi gave the home side a comfortable victory.

In the Junior Premier League, the Under-13s representing the Yeovil Town Community Sports Trust won their match against the Wiltshire Academy.

However, there were defeats for the Trust’s Under-12s, Under-15s and Under-16s teams. 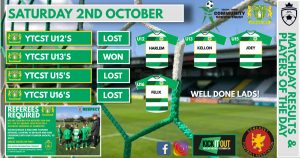