Yeovil Town manager Chris Hargreaves and his Torquay United counterpart Gary Johnson are looking forward to facing each other in the National League next season.

The pair are legends at their respective clubs with Hargreaves having been part of the Torquay side which won promotion back to the Football League in 2009, whilst Johnson guided Yeovil out of non-League and in to League One in his first spell as manager before returning to take us to the Championship.

Speaking to Torbay Weekly, Johnson said: “I’m pleased that Chris has got the job there – I’m sure in his mind he always wanted to get back into it. He’s missed it, but he’s young enough to give it a right go.

“He’s got a bit of work to do there, but when you take over a club, it’s not a bad thing when you’ve almost got to start from scratch.

Hargreaves returned the compliment saying he was “really looking forward” to a return to his old stomping ground with his new club.

He said: “I’m really looking forward to it. I respect Gary for the fantastic job he did here, and for the way he’s turned things round at Plainmoor, but you’ve got to do things your own way.

“Both clubs need to be in the Football League. I played for Plymouth and Torquay, coached at Exeter, managed at Plainmoor and now I’m here, so I want all those old West Country rivalries back, and I’m sure the fans do.

“One thing’s for sure, I’m too long in the tooth, as Gary is, for anything to get personal next season, and that’s a good thing.”

Over the past three seasons since the Glovers dropped out of the League, the two clubs are level after six matches with Darren Sarll’s men getting the better of Johnson’s Gulls twice in 2019-20, each side winning their home match the following campaign, and then Torquay winning home and away last season.

The YTFC Legends and South West Legends have learned who will be guiding them in the much looked forward to match to remember Adam Stansfield and those close to Yeovil who have sadly passed. 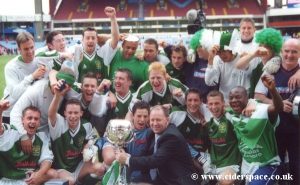 The Glovers, a team made up of the 2002-05 squads who led Yeovil from a Trophy win at Villa Park, out of Non League and through into League Two will be managed by, who else, but Gary Johnson.

Johnson had two stints in the Huish Park hot seat (the second one wasn’t exactly terrible either 😉 ) and will of course be assisted by Steve ‘Thommo’ Thompson.

In the away dug out will be none other than Darren Sarll.

Sarll, who left for Woking in March, returns to Huish Park for the first time since his departure and will guide the South West Legends XI with a bit of help from Bath City Manager Jerry Gill, who may be donning his boots for a bit and playing too.

Sarll will be given a chance to say thanks to the fans after his sudden exit and conversely, the supporters will get chance to thank the man who guided the Glovers through a Non League Play Off campaign, and the behind closed doors era as well as being an immaculate leader during a time of immense sadness when tragedy fell over Huish Park after the passing of Lee Collins.

Tickets are available now for the Legends game on Saturday May 14th!

Ex-Glover Gabby Rogers has signed on the dotted line at Torquay United after impressing on trial.

Rogers scored against Torquay for Tiverton last week, before scoring an impressive goal for Torquay on Saturday.

Speaking about the return to his boyhood club Rogers told the club’s official website: “It’s wonderful, it’s great to be back. Obviously I started out here when I was eleven, and was here four or five years until they had to shut the academy down, so it’s great to be back and I just want to get as many games in as possible, and see what happens from there.”

He joins Gary Johnson at Torquay who told the official website: “We were aware of him at Yeovil, and we were aware of him going to Tiverton to keep fit and get a couple of games, so we decided to watch him, but we had already arranged then that he would come in training after the Tiverton game. He didn’t have to impress, but he did.

“He came into training and impressed everybody. He looked the part, of course we played him in the game, and he showed in the game what he could do in training. We looked back at some of his stuff, and we thought that he was something different, something that we could use and nuture, and bring out his potential. If you can do that, you’ve got a player.

“He also comes from good stock. He was born in Torquay and was at Torquay as a young lad, and his dad played for Plymouth. He’s ready now – he’s gone beyond being a youngster, he’s 20 and needs regular games at a good level.”

The average travel time of a Yeovil Town supporter reduced dramatically as Hartlepool United saw off Gary Johnson’s Torquay United on penalties in a dramatic play-off final at Ashton Gate.

The Poolies won it 5-4 on penalties with Yeovil-born midfielder  Matt Buse missing the all-important spot kick for the Devon side.

Hartlepool had looked like they were destined to win it in ordinary time after Luke Armstrong, who is on loan from Salford City, scored his 15th goal for the club  gave them a 35th minute lead.

The North East side were on top for the majority of normal time but as the clock began to tick down, Johnson’s men began to lay siege on the Pools’ goal.

It looked as if they had weathered the storm  until in the fifth minute of injury time when a high ball in to the box was met by a glancing header from the Brazilian Covolan, who had gone forward for an earlier set piece.

In the shoot-out, neither side scored the first two spot kicks with Covolan saving both Hartlepool’s opening two efforts.

Notts County and Hartlepool United are standing in the way of a Johnson-versus-Madden head-to-head in the National League play-off final.

A brace from striker Rhys Oates earned Hartlepool a 3-2 win over Bromley in the play-off quarter finals on Sunday to set up a semi-final against Paddy Madden’s Stockport County next Sunday.

Ex-Yeovil Town striker Courtney Duffus was missing from the Bromley side, seemingly out of favour with new Ravens’ boss, Andy Woodman, but there was a second half appearance for Byron Webster.

In the other quarter-final, Notts County defender scored a later winner to settle an enthralling 3-2 win over Chesterfield, whose manager James Rowe was not bitter about the defeat and instead blamed the referee in his post-match interview,

Notts face Gary Johnson‘s Torquay in the first semi-final next Saturday, with the final taking place at the home of football, Bristol City’s Ashton Gate, the following weekend, 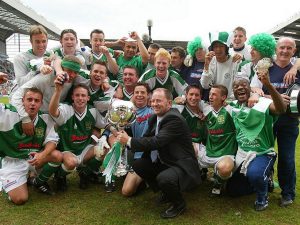 Gary Johnson is the Vanarama National League Manager of the Month for April, having guided promotion chasing Torquay to six wins from seven over the month.

Hartlepool midfielder Gavin Holohan picked up the Player of the Month award.