New Yeovil Town assistant manager Chris Todd believes that following the model of youth development at some other Westcountry clubs will be important at Huish Park.

The former Exeter City and Torquay United defender has arrived as number two to boss Chris Hargreaves, who he played alongside when the Gulls were promoted out of the National League by the play-offs in 2009.

He left his job as Under-18s manager at Plainmoor where he won the South West Counties Youth League title and cup in the same league the Glovers’ Under-18s played in last season.

“It happens at Exeter, Plymouth do it and Torquay are starting to turn that around, but the backbone of a football club is the youth set-up and the community.

“I have experienced that, I know how it works and how to develop players at a young age and hopefully that can materialise on to the pitch with the first team.”

He described the opportunity to link up with Hargreaves as “a no brainer” and said his experiences as first-team manager at Eastleigh and Gloucester City would allow him to support the new boss.

The 40-year-old added: “Chris is very ambitious and so am I, we are two guys who have experienced different things in football through the youth set-up and working as assistants which will hopefully put me in a place where I can help Chris and help this club move forward.

“I have been fortunate to work with some really good managers as a player, but when you are in the hot seat, the assistant is a really important role and it’s important to give the manager your experiences and I hope I will do that well for Chris.

“I’m here to help him and the players, to have that daily camaraderie with them and develop them and try and push them on. We’re all here to be successful and it’s a great club which I believe can go on to bigger and better things.

“I was successful at this level as a player, I know this league and I have seen it develop over the years and get stronger, there’s obviously a lot of money in the league now.

“We can’t hide from that, it’s a big challenge but it’s about player development, working with the boys and hopefully we can get the best out of them.”

Todd’s departure from Torquay was announced hours before his announcement at Huish Park on Wednesday with the statement on his exit speaking of how he had worked closely alongside Gulls’ boss and former Glovers’ legend, Gary Johnson.

As a player, he he made more than 400 appearances in a career which started out at his home town club, Swansea city, before spending four years at Exeter City. He captained the Grecians when they made the National League play-offs in 2006, missing out in the semi-finals.

He went on to join Torquay in 2007 and was diagnosed with leukemia 18 months later which kept him out of the game for three months before returning to be part of the side which reached the play-off final with Todd named man of the match in a 2-0 win over Cambridge, a game where Hargreaves scored the Gulls’ second.

In 2010 he was part of the Newport County side which won the Conference South title whilst on loan from Torquay.

He played for Forest Green Rovers and Eastleigh where he was appointed manager in September 2015, guiding them to their first ever appearance in the FA Cup third round and seventh place, just missing out on a play-off place.

However, he was relieved of his duties after just four games of the following campaign with the club in 16th place.

In October 2018, he was appointed manager at National League South Gloucester City but last less than three months after going 15 games without a win.

In September 2019 he returned to Torquay as manager of the club’s under-18s. 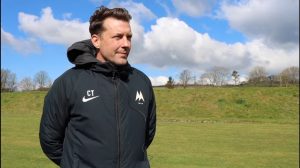 Yeovil Town have confirmed that former Eastleigh and Torquay Under 18s manager Chris Todd is the club’s new assistant manager.

Chris Hargreaves confirmed he would be adding to his coaching staff and this represents his first appointment.

Speaking to YTFC.net he said; “I’m very excited. It’s a new challenge and when I spoke to Chris, we had a good conversation. We discussed the future of the football club and I wanted to be a part of that.

“I hope the fans are excited about the new journey that we’re on together. I will give 110% daily, as I know Chris will and the rest of the background staff.

“This is a good group and we’re trying to make them successful, if they’re successful the Club is successful and it’s a good moment for everyone.”

Todd was part of the England Colleges coaching system this season so has recently worked with the Glovers’ Ollie Haste already.

He represented Exeter, Torquay, Hereford and Forest Green Rovers as player with coaching and management roles at Gloucester and Eastleigh since.

He was also diagnosed with a form of blood cancer in 2008, thankfully he recovered, he’s an author and an actor with a credit in a World War Two film and he’s performed in a national choir, is there anything this man can’t do!?

Torquay United’s 4-1 FA Cup win in 2008 which was shown live on the BBC, he scored the equaliser for the Gulls, cheers for that Chris.

Welcome to the club, Chris!